She ran on ahead as I stopped to take a swig from my water bottle and relish the cool shade of a sprawling cypress tree. Her strong, trim figure disappeared around the curve of the hike-&-bike trail, but I wasn’t worried. This had been her daily run for as long as I could remember, and I knew the 3 ½ mile path well. She wasn’t fast, but she was consistent, and on my bright-blue bicycle I knew I would quickly catch up to her steady jog. At thirteen, I was almost as tall as her now, and with our similar haircuts we looked more alike than ever. Twice this summer we had been mistaken as sisters. I was eager to be like Mom, glad to be out on the trail with her, and proud of her energetic, youthful beauty. 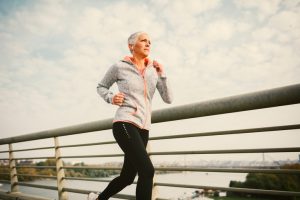 Thirty-five years later she’s not quite so youthful…yet looks nowhere close to her 74 years. The laugh-lines around her eyes wrinkle as she squints in the morning sunlight of that same hike-&-bike trail, and alternates between several minutes of gentle jogging and swift walking. Her pace is slower, yet she still consistently achieves top placement for her age-group in local 5k running races. Most women her age are slow and sedentary, forgetful and dim in the golden-years of retirement. But not Mom. Retired from 25 years of teaching elementary school, she now works as a librarian and is always on the go. From gardening to book clubs, grandkids to nature-center docent, playing piano for church choir and local Alzheimer’s support group gathering, her energy is constantly put to the test. Her mind is sharp, her body is strong.

Recent research on the effects of physical exercise reveal that my mom is nothing special; she is simply the textbook result of having been a lifelong exerciser. Scientists with King’s College London and the University of Birmingham completed a research study with older adults comparing those who regularly exercise with non-exercisers. The findings were unsurprising yet convicting: lab results of those who had exercised consistently revealed far fewer of the typical aging deficiencies with thyroid and immune system. Conversely, the more sedentary people displayed effects of aging we’ve come to consider normal, such as diminished muscle mass, plummeting testosterone, and suppressed immune systems leading to inflammation, brain-fog, memory problems, stiffness, and chronic pain. That doesn’t sound like a very fun way to live out the final years of life. Unfortunately, most of us simply expect to become grumpy old men and women. Seems that once we’re old enough to worry about getting old, we’re too old to do anything about it! Sigh. 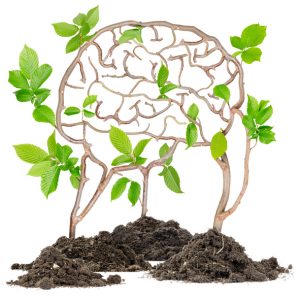 But what if that weren’t true? What if it’s not too late? Researchers from the University of Western Ontario found evidence of a significant increase in cognitive processing from a single 10-minute effort of moderate to intense exercise. Taking this first step towards a healthier life launches a spiral of positive brain and body benefits. Exercise is the number-one way to increase BDNF (brain-derived neurotropic factor), a protein that contributes to the growth and health of brain neurons. Over the lifespan, aerobic exercise efforts gradually diminish, as does BDNF (think of a feverishly-learning preschooler as compared to her laundry-folding daddy as compared to grandma snoozing on the sofa), and thus we experience a slow decline of neural connections and cognitive efficiency. Multiple research studies concur that starting a habit of exercise can profoundly benefit body and brain by increasing BDNF, preserving white matter integrity and maintaining hippocampal volume. What does all that neuroscientific jargon really mean? It means it’s never too late to rejuvenate your life, and even a 10-minute brisk walk today can start turning back the hands of time!

In fact, multiple bursts of exercise even as short as five minutes can improve focus, attention, and working memory. In the June 2018 issue of Journal of Applied Research in Memory and Cognition, researchers from McMaster University unveiled an intriguing new study with students attending a lecture. Participants were randomly assigned to three different groups: group one attended a 50-minute lecture while sitting as expected in a classroom, while the other two groups were directed to participate in three evenly-spaced 5-minute breaks of either video gaming or bursts of exercise during the same lecture. You guessed it; the group who took exercise breaks scored significantly better on attention during the lecture, as well as accuracy and understanding of the lecture material. Science is offering compelling evidence of the positive cognitive benefits gleaned from physical exercise, for brains of any age!

As you can probably surmise, I grew up running, biking, swimming, dancing, and exercising on a near-daily basis. With an influence like my mom, it was inevitable. But life gets busy, the years roll by, and after having seven babies, I hardly recognized the outta-shape, non-exercising woman I had become. Sure, I had put on a few pounds, but the bigger issue was how foggy and brain-dead I was feeling. Mornings were torture, I could barely focus enough to read the newspaper, and every afternoon I hit an insurmountable wall of fatigue and brain-fog. It had been years since I’d exercised consistently. The weekend my mom came to visit was just the catalyst I needed. Even at our high mountain altitude, she insisted on heading out for a morning jog, asking “Aren’t you coming with me?” I grinned sheepishly and laced up my dusty running shoes. For the next half-hour I huffed and puffed next to the grandmother of my children, as she chatted away during our slow and steady jog. Clearly, it was time for me to make a change. 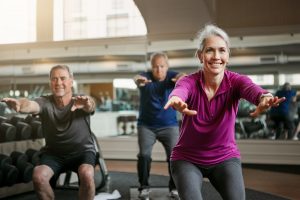 Here’s the thing that you and I both know: the brain controls the body. The thing we’re not so cognizant of is that the body also controls the brain. Like the two halves of an endlessly looping infinity symbol, scientific research confirms our brains and bodies are inexplicably entwined. Five minutes of aerobic exercise can fire up your brain, boost your mood, and energize your body with motivation to pursue another five minutes. A worn-out brain can’t seem to find the motivation for exercise, but with a teeny bit of willpower and just five minutes to launch a new life, that spiral of movement-improvement begins.

The bottom line is, I want a better life, and you do too. Hey, I get it — I’m not a total mess — I’m doing pretty well! But I want to be weller. Don’t you? Just five minutes of exercise can prime my brain to launch that path of wellerness. A five-minute brisk walk around the block this afternoon leads to another brisk walk tomorrow morning, and then a ten-minute walk up and around the neighborhood hill tomorrow evening. By next Friday, I’ll be inspired and energized, my mind will be clear, my cognitive performance sharper. I can’t claim exercise as the fountain-of-youth, and I won’t promise you genius-level IQ after six weeks of increased physical activity. But I can promise you this: a teensy-weensy bit of willpower can be the catalyst for profound improvements in your body and brain.

Alas, that’s all I’ve got for now…the hike-and-bike trail is calling…

Read the research discussed in this article: