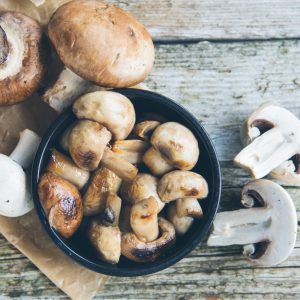 The retirement home kitchen is bustling with activity. Staff members put the finishing touches on a delicious dinner prepared for the residents and their family members. Fresh vegetables and wild rice are served alongside grilled chicken…a typically healthy meal for these aging seniors. But the unusual addition of sauteed mushrooms prompts my question: why mushrooms? “Good for the brain,” responds the cheerful staff member.

As a non-fan of mushrooms, and a huge fan of brain health, this certainly piqued my interest. Time to investigate!

Sure enough, my investigation turned up compelling evidence of the brain-benefits of mushrooms. A study from Singapore included over 600 participants who were sixty years old or older. According to the article published in the Journal of Alzheimer’s Disease, the participants who ate mushrooms at least two or more times per week had fewer occurrences of mild cognitive impairment as compared to their cohorts who consumed mushrooms fewer than once per week. Scientists concluded that the bio-active compounds in mushrooms helped contribute to brain health by delaying neurodegeneration.

I think it’s high time I began to cultivate an appetite for mushrooms!